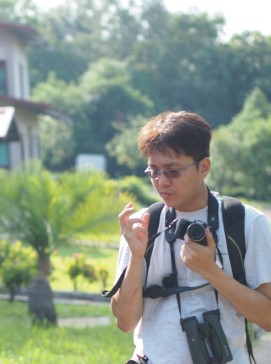 Kwek Yan Chong (“Kwek”) is from the Department of Biological Sciences, National University of Singapore (NUS), where he obtained his PhD in 2013 with his thesis on the effects of greenery on urban biodiversity. He obtained a NUS Overseas Postdoctoral Fellowship to be based at CEED/CBCS, University of Queensland, for two years from October 2015.

Kwek’s research interests are in vegetation ecology, invasion ecology, and urban ecology. He works on how the planning of urban greenery and green spaces can be optimized for both biodiversity and humans. He also contributes to biodiversity surveys that have informed urban biodiversity protection and enhancement in Singapore. His previous postdoctoral stint was on an interdisciplinary project to model vegetation-hydrology relationships in a catchment containing Singapore’s last substantial tract of freshwater swamp forest. Together with the students that he has mentored, Kwek has worked on topics ranging from: the establishment, spread, and impacts of non-native plant species, in particular a series of projects on Cecropia pachystachya; plant diversity in former plantations and wastelands; floristics of coastal vegetation on small islands; the effects of urban strangler figs on urban bird diversity; epiphytes on urban trees; masting of dipterocarps in highly degraded forest fragments; the effect of nature experiences on conservation attitudes; socioeconomic inequity in greenery provision, etc.

He is also keen on contributing to the development of the standard of scientific research in Southeast Asia, a diverse and unique region. He believes that an understanding of local cultural sensitivities and socio-political realities is key to maximize the impact of conservation science.